atouristlife cta,ccc,acc
Unspoiled Florida
​There are so many things to see and do in Florida. Here are a few things usually only Floridians'  ever see. 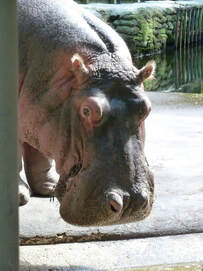 Manatee also called Sea Cows are endangered. This refuge area in Crystal River gets the largest number in one place. As the water temperatures start to get colder during the winter they come here to the shallow warmer water.
Many years ago the State of Florida took over all of the parks as tourists dwindled. Now much of the daily activities are run by volunteers.

Another great stop nearby is Ellie Schiller Homosassa Springs Wildlife State Park. The park features mainly native Florida wildlife with the exception of Lu the Hippopotamus.

Lu was supposed to leave in 1989 when the park was taken over by the state. Luckily the overwhelming support allowed him to stay. Lu is 60 years old. Not only great childhood memories but I still try to visit anytime we are in Florida.

Be sure to let me assist you in choosing a place to stay. Although beautiful this area does not have many choices. Be prepared to either drive a few hours for a little luxury or consider roughing it.  ​

This Florida Keys Overseas Highway “bucket list” journey so popular with visitors to the islands follows a trail originally blazed in 1912 when millionaire Henry Flagler built what became known as the Florida Keys Over-Sea Railroad from Miami to Key West.
Flagler envisioned a train route connecting all the Florida Keys and mainland Florida. Flagler inspired an army of men to spend seven years constructing the railroad’s bridges and land-based tracks, and in 1912 the first train pulled into Key West.
After only two-plus decades of carrying freight and wealthy vacationers, much of the railroad was badly damaged in a 1935 hurricane. The railroad ceased operations on the Miami-Key West link, following extensive damage to the roadbed by severe winds and erosion and the economic decline caused by the Depression era. Three years later the Overseas Highway debuted, built on a foundation that incorporated some of the original railway spans.
Construction of the Overseas Highway was an incredible engineering feat. In 1982, 37 original bridges were replaced with wider, heavier spans, including the well-known Seven Mile Bridge at Marathon.

Above story obtained from Fla keys.com

Which Coast do you prefer  ?
I appreciate your patience , this wonderful new Website is still under construction. I will be adding more fun things to do in Florida soon. Want to know more now? Just give me a call.
"Everything old is new again"